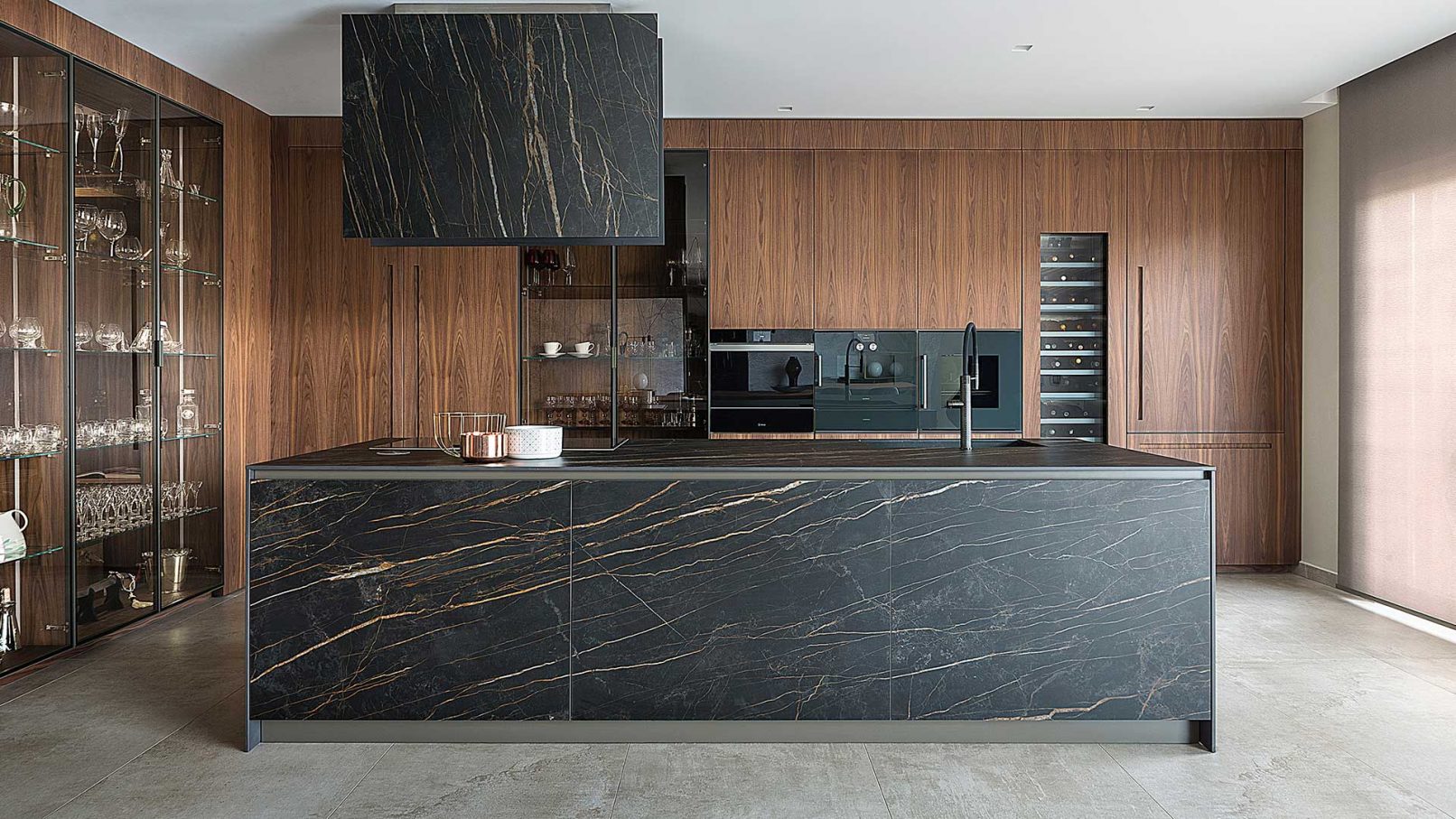 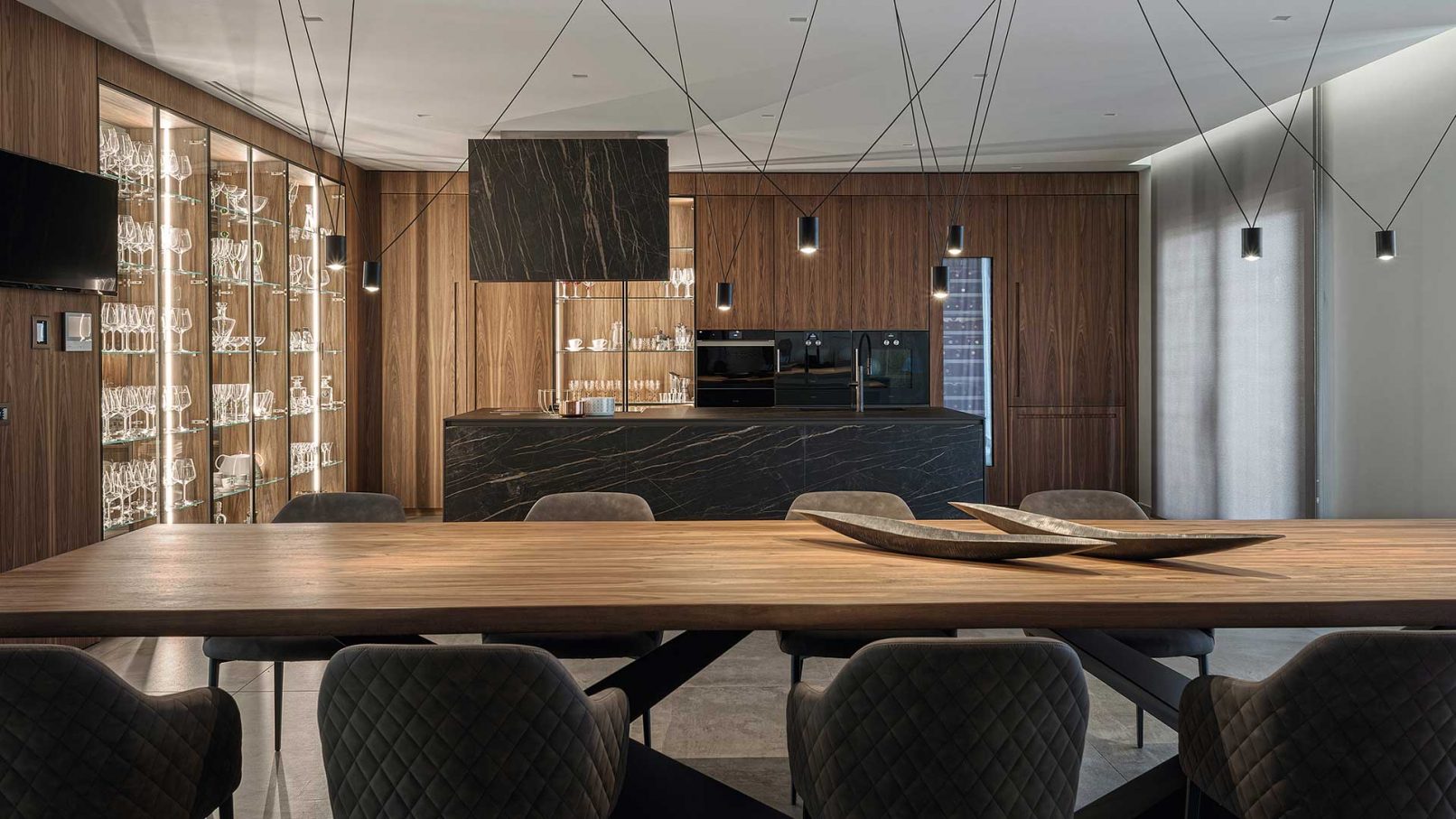 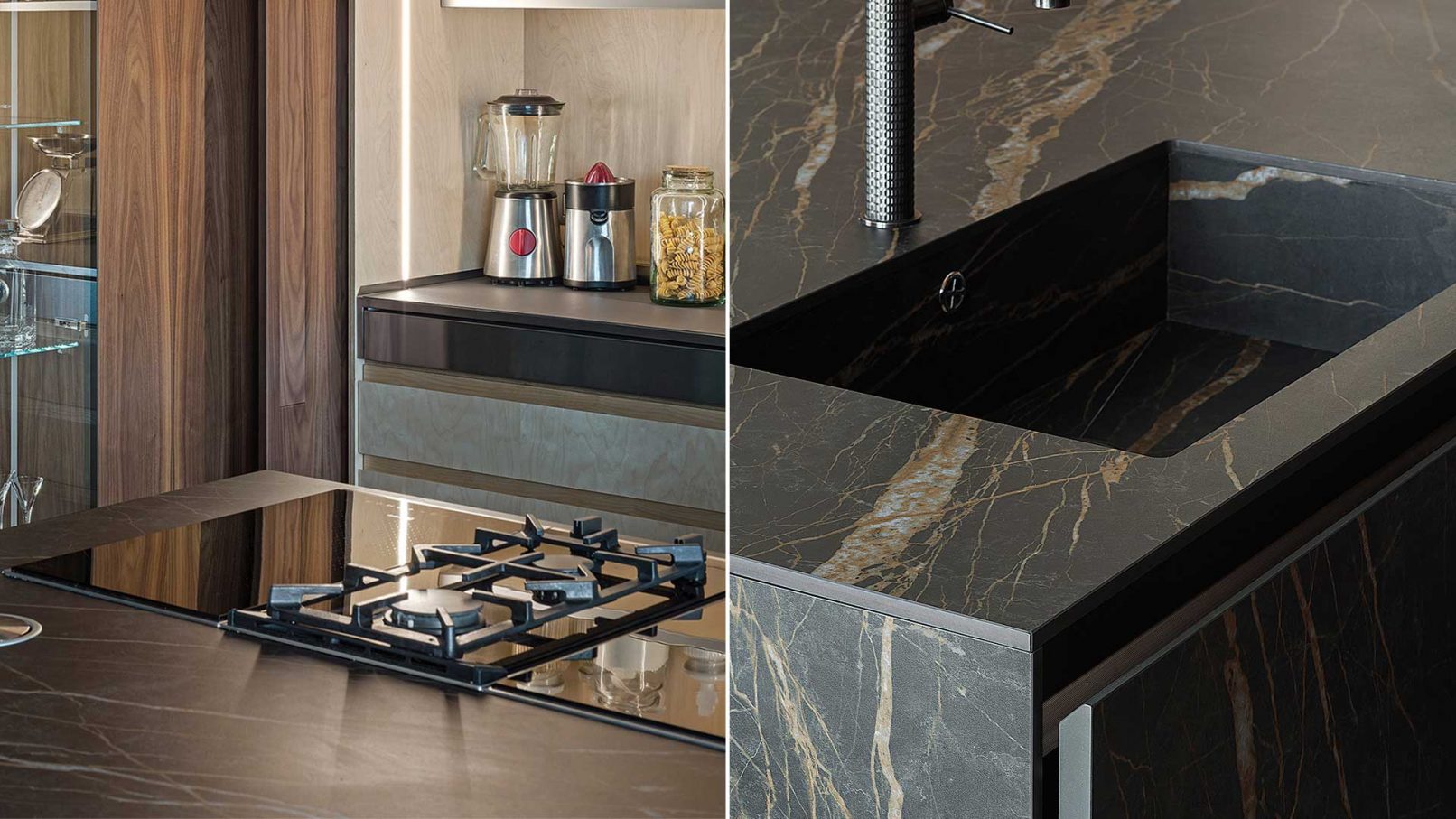 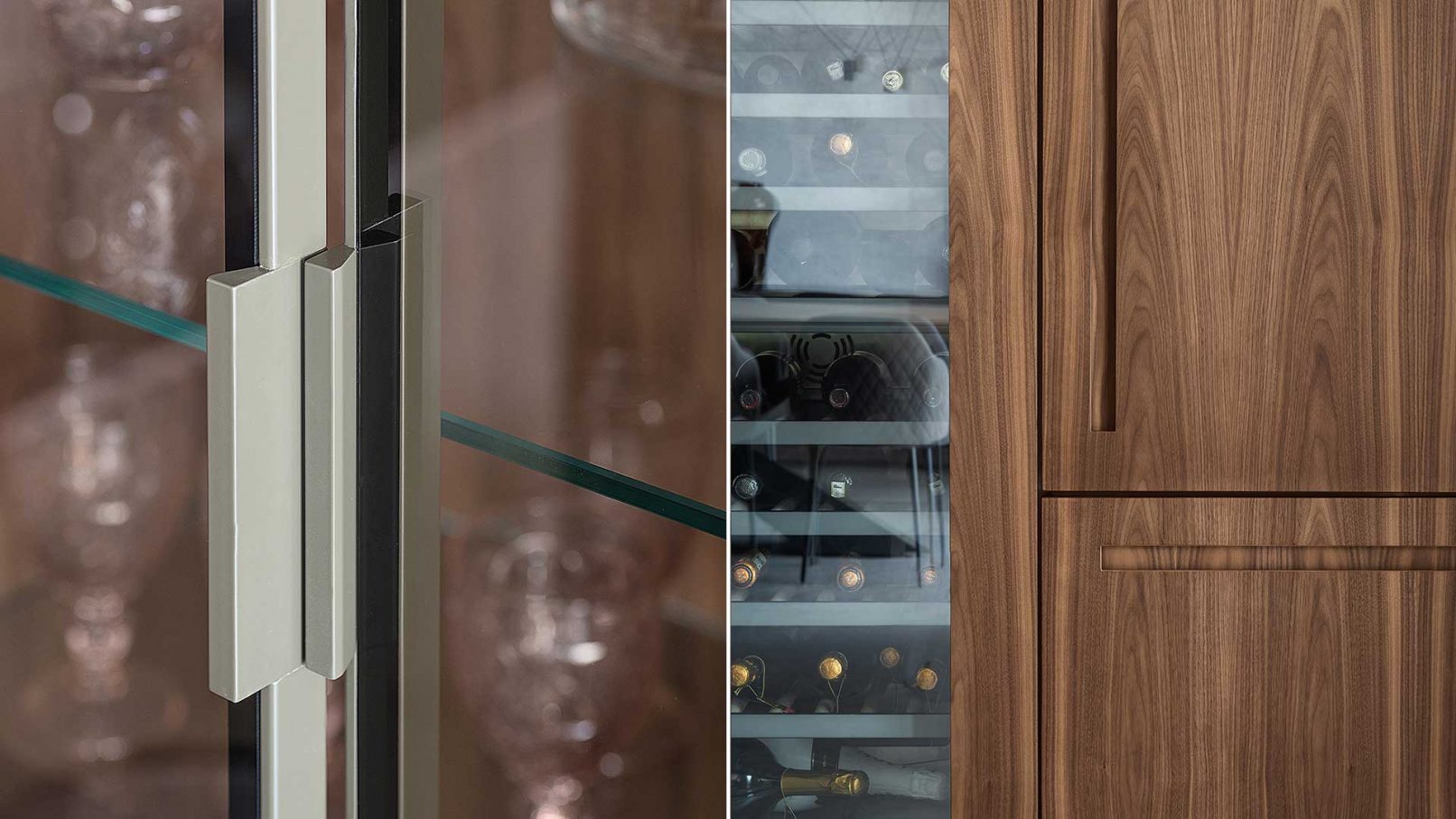 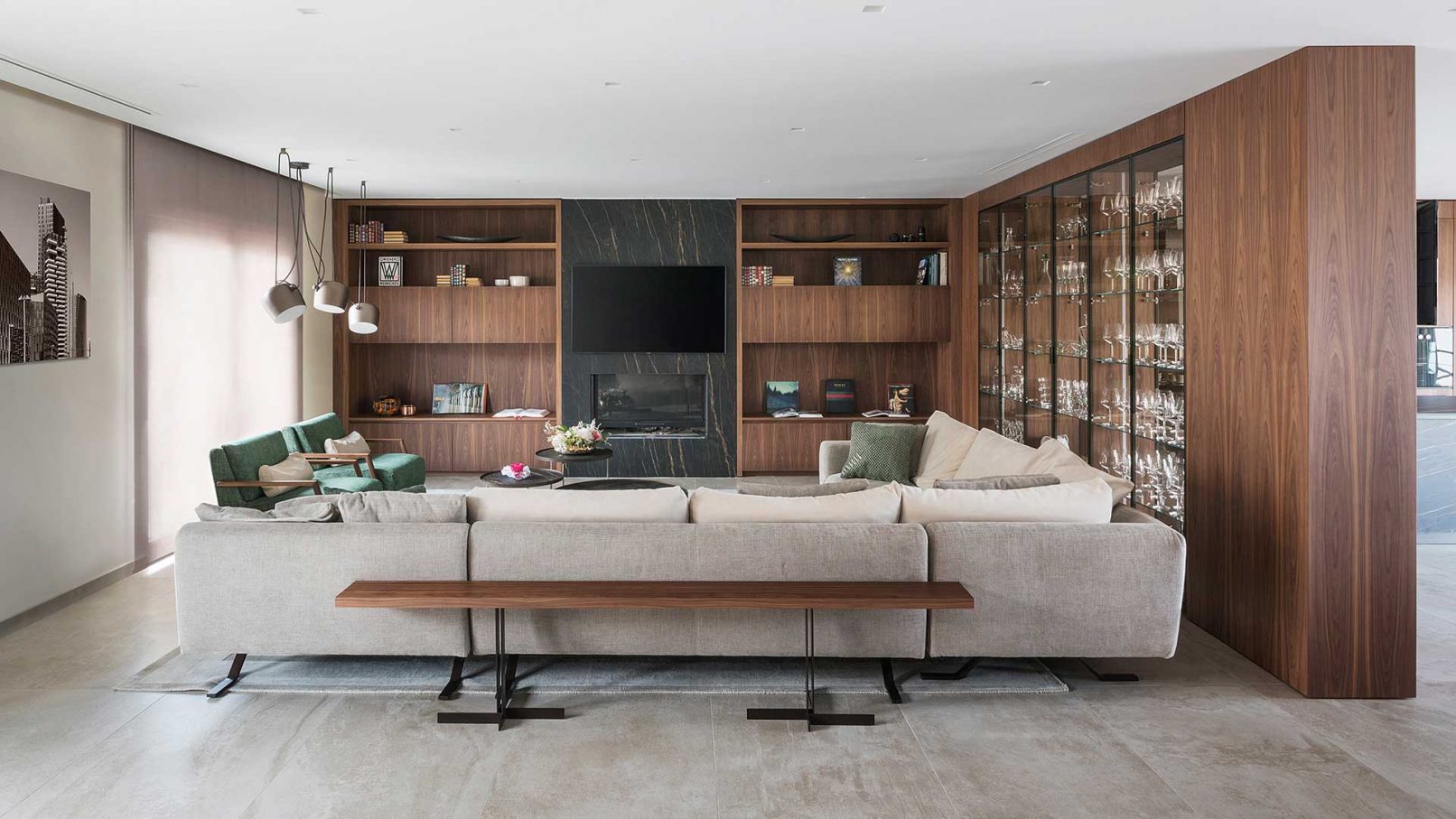 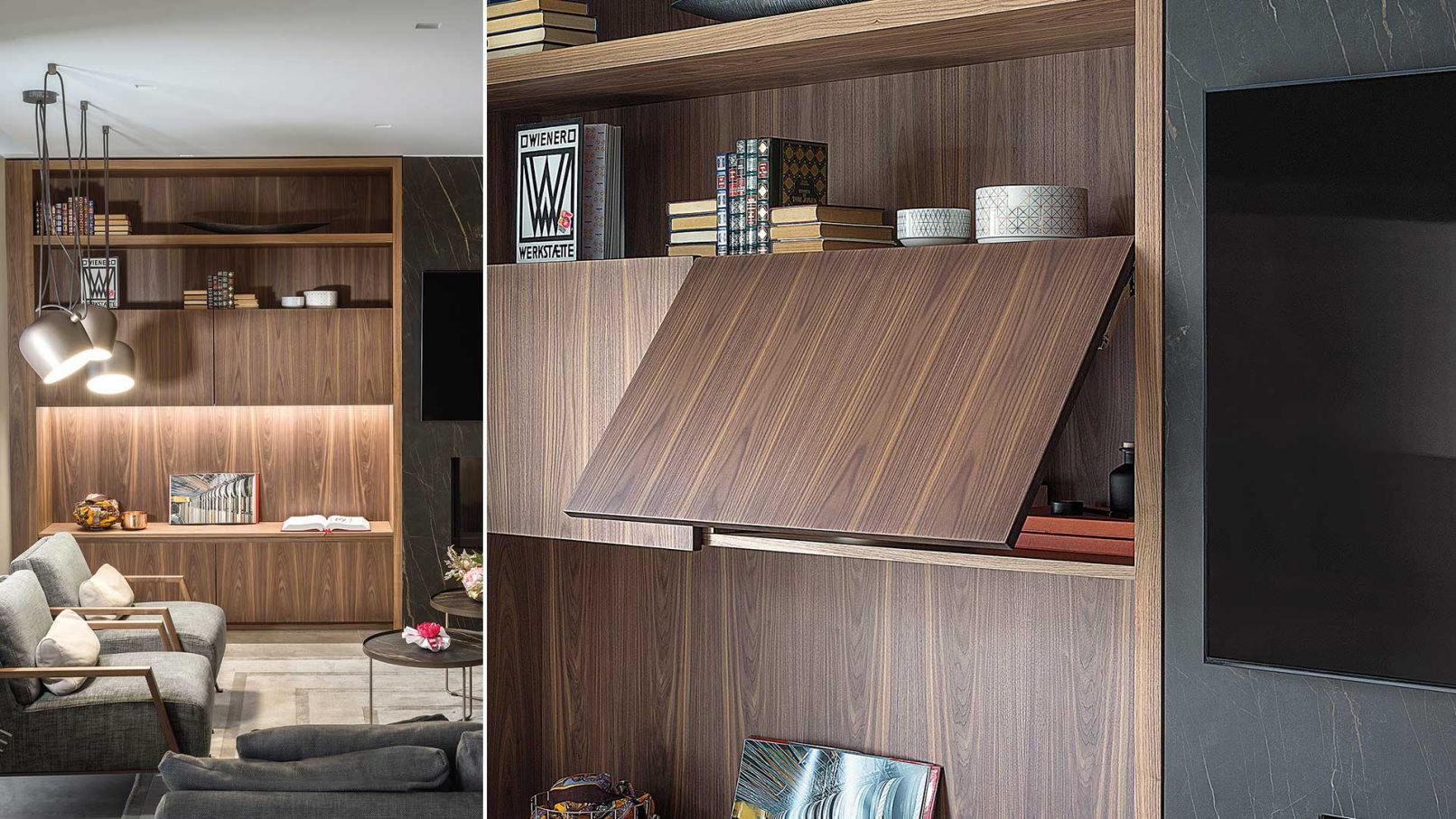 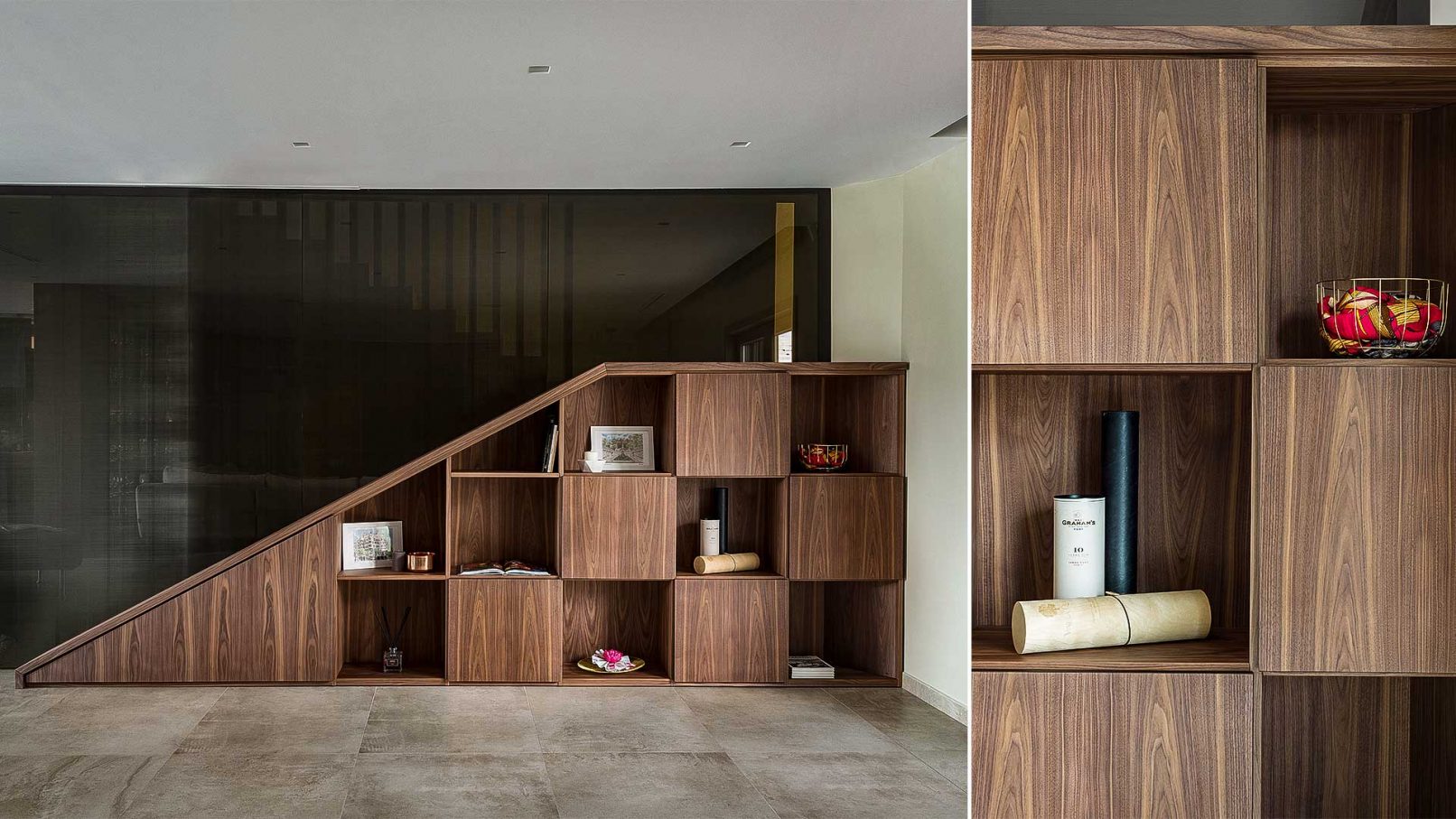 KITCHEN WITH ISLAND AND COLUMNS, IN CONTINUITY WITH THE LIVING AREA – 201811

In Naples, a special project of a kitchen with island, glass cabinet and living area cabinets.

TM Italia shows all its craft savoir faire in this kitchen with island and living for a private client in Naples.

The project includes turnkey construction of the entire architectural space, where the large open space is divided into functional areas – dining and living – by an impressive composition with a T layout that includes the kitchen with island, the living room furniture, and the equipped wall.

On linear composition, the kitchen with central island, developed on T45 model, is entirely in Gres Laminam Noir Desir, upon request of the customer. The material continuously covers the sides, the T45 drawer fronts, bins and storage compartments and the worktop incorporating a filotop hob and a built-in Gres sink. The painted structure in metal effect creates a linear contrast design that frames the doors and fronts.

The composition of columns, designed on model D90, has a natural Birch structure and front elements in Noce Canaletto with inside handle. The set-up is punctuated by the alternation between storage compartments and appliances supplied such as a fridge column, thermo-regulated cellar with glass door and ovens columns. Backlit glass cabinet on bronze structure adds particular charm to the composition, while the retractable doors give access to the auxiliary work area. The cabinets above the ovens are in continuity with the columns and their opening is facilitated by a push & pull mechanism.

The extreme flexibility and technical capacity of TM Italia makes it possible to integrate the kitchen and the living area, maintaining the continuity between the two spaces with great elegance.

To delimit the functional space of the two rooms, a central wall has been created with doors in bronzed glass on both sides. Developed on model D90, it has structure and paneling in Noce Canaletto, while internal shelves, equipped with LED lighting, are made of glass.

The large open module features a symmetric composition compared to the central module in gres which houses the wood fireplace and home entertainment.

The alternation between drawers, storage compartments with flap doors and open compartments of various heights creates a compositional elegance.

In continuity with the kitchen furniture, in the living room a built-in area cabinet has been realized with lower doors in T45 model, an intermediate suspended unit with flap doors and LED lighting and upper bookcase unit.

The bespoke trapezoidal module, which optically follows the architectural lines of the space, completes the furnishing. It is characterized by an alternation of open compartments and storage compartments, with push & pull opening doors. The structure is entirely in Noce Canaletto.

Betulla naturale instead was chosen as the a material for the structures.

The entire project has been designed and developed by TM Italia.